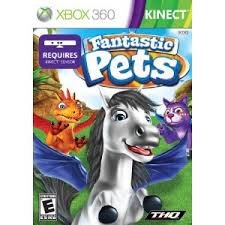 Fantastic Pets - Kinect experience
Kinect works very well with this game. Blitz is as good as Frontier when it comes to using the hardware. The game features all of the same stuff that Kinectimals has. You can pivot left or right and the camera moves with you. One additional feature I noticed is it's constantly auto-zooming, so if you move closer or farther it adjusts the camera angle in the game. Neat stuff, voice recognition works also. The pets have their own names though, can't name them whatever you want like you can in Kinectimals.

Fantastic Pets - Graphics
The graphics are pretty cartoony, as well as the animals. Kinectimals brought a realistic graphic feel to everything where you could see the individual fur strands on the pets, this is like a straight up cartoon.

Fantastic Pets - Gameplay
Ok so the game is wierd to me. I didn't test with the kids however most will probably like it. You start with a starter pet, you can pick whatever you want, they have 4 categories, cats, dogs, lizards and horses. Some of them are already messed up in the beginning because the Dr. you are working for has been experimenting with morphing animals. You can though as you progress through the game add/change/remove parts to your pet.

For example, you can give a dog wings. When you flap your arms, your dog will fly. Or you can call his name, then command such as my dog's name was Rowdy, so Rowdy Fly and he'll fly. The one cool thing they did was a lot of stuff takes place in your home, somehow my animal was able to see the couch in my living room and it would run around on it, and it runs behind you and stuff. Cool new feature that puts your actual playspace in a virtualized world.

The games activities are pretty cool, all of the normal stuff is there, throwing a ball/playing fetch, feeding your pet, washing your pet, etc. The one thing they did a little differently is a talent show. This consists of like 5 mini-games that you have to try to score gold medals in each event. This is where the activity increases. There's a race where you become your pet and you run your pants off, although its intended for kids so I was just jogging and was at maximum speed. After you do the talent show, it then goes into random mode, where you are back in your playarea (this is live video of your playspace) and then your pet will come by you when you call him, and he'll show you a bubble with what he's thinking and you can do that activity or choose your own from your PDA.

Also you can fly to like 30 or 40 different locations all over the world and you can find new specimens to add more parts to your animal. It's probably a real good game for those with creative/imaginative minds, however to appease adults, I don't think its there...now adults on drugs, they will probably eat this game up (not that I'm promoting drug use as I'm not, I'm just stating the obvious

Fantastic Pets - Multiplayer options
I didn't play multiplayer but it is setup like Kinectimals where a second player just join in on random activities.

Conclusion
Overall, to me its just a wierd game. I'm not a kid anymore so I have a different look on it, Kids will probably love it. I am impressed that Blitz is one of the few developers that are good with utilizing Kinect, so for whatever reason this game was made, I am looking forward to a real game that they develop next.
Reference URL's